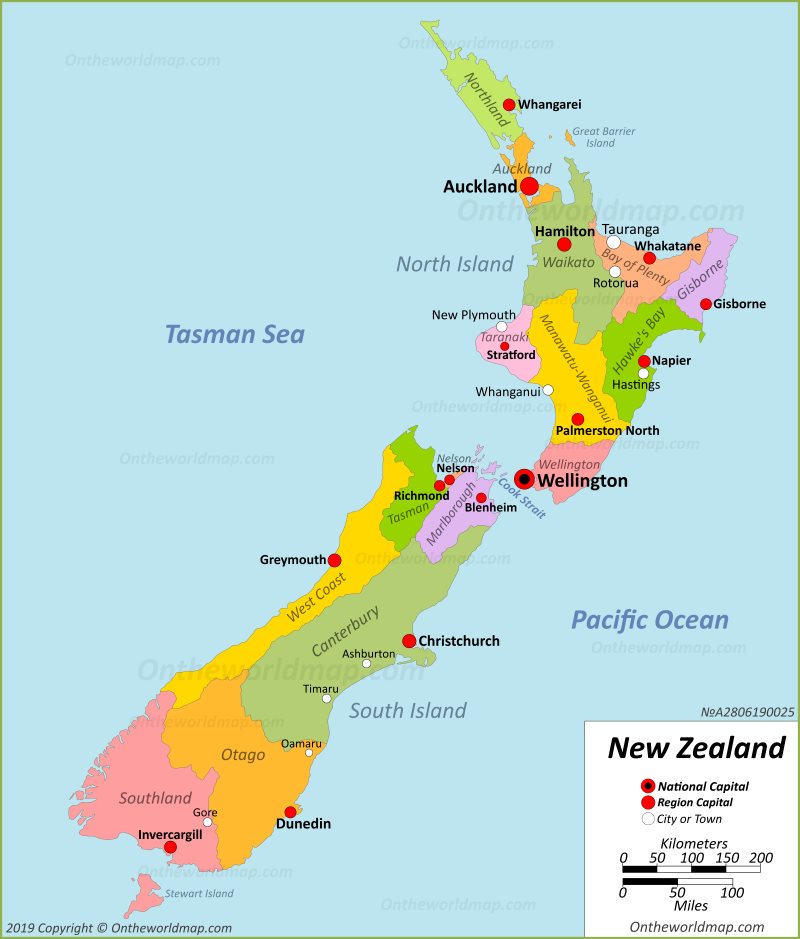 New Zealand is an island country in the southwestern Pacific Ocean. It consists of two main landmasses—the North Island (Te Ika-a-Māui) and the South Island (Te Waipounamu)—and around 600 smaller islands, covering a total area of 268,021 square kilometers (103,500 sq mi). New Zealand is about 2,000 kilometers (1,200 mi) east of Australia across the Tasman Sea and 1,000 kilometers (600 mi) south of the islands of New Caledonia, Fiji, and Tonga. The country’s varied topography and sharp mountain peaks, including the Southern Alps, owe much to tectonic uplift and volcanic eruptions. New Zealand’s capital city is Wellington, and its most populous city is Auckland.
Key Facts

Passports must be valid for 3 months beyond intended date of departure from New Zealand. Passports should be submitted in original along with the application. Applicants are required to provide documentary evidence of income and source of income of their parents, even if the cost of study is being sponsored by another person. All educational certificates and the transcripts should be provided which includes: They do not consider TOEFL results in isolation as conclusive evidence of English Language ability, as they are unable to be readily verifiable. They strongly recommend that if a student is to undertake a test they should undertake the IELTS test so that their level of English is clearly measured against the course requirement. (The company address and phone number must be included on the letter) student visa in New Zealand. However, if the course duration is less than 1 year or 1 year, then the student visas will be issued for the duration of the course. 13.Panel Doctors In Nepal for the medical

Can apply as visitor visa if course is Post Graduate level

20 hrs. per week during study and full-time during vacation

New Zealand is located near the Centre of the water hemisphere and is made up of two main islands and a number of smaller islands. The two main islands (the North Island, or Te Ika-a-Māui, and the South Island, or Te Waipounamu) are separated by Cook Strait, 22 kilometers (14 mi) wide at its narrowest point. Besides the North and South Islands, the five largest inhabited islands are Stewart Island (across the Foveaux Strait), Chatham Island, Great Barrier Island (in the Hauraki Gulf), D’Urville Island (in the Marlborough Sounds) and Waiheke Island (about 22 km (14 mi) from central Auckland).
New Zealand is long and narrow—over 1,600 kilometers (990 mi) along its north-north-east axis with a maximum width of 400 kilometers (250 mi)—with about 15,000 km (9,300 mi) of coastline and a total land area of 268,000 square kilometers (103,500 sq mi). Because of its far-flung outlying islands and long coastline, the country has extensive marine resources. Its exclusive economic zone is one of the largest in the world, covering more than 15 times its land area.
The South Island is the largest landmass of New Zealand. It is divided along its length by the Southern Alps. there are 18 peaks over 3,000 meters (9,800 ft.), the highest of which is Anorak / Mount Cook at 3,724 meters (12,218 ft.). Fordland’s steep mountains and deep fiords record the extensive ice age glaciation of this southwestern corner of the South Island. The North Island is less mountainous but is marked by volcanism. The highly active Taupo Volcanic Zone has formed a large volcanic plateau, punctuated by the North Island’s highest mountain, Mount Ruapehu (2,797 meters (9,177 ft.)). The plateau also hosts the country’s largest lake, Lake Taupo, nestled in the caldera of one of the world’s most active supervolcanoes.
The country owes its varied topography, and perhaps even its emergence above the waves, to the dynamic boundary it straddles between the Pacific and Indo-Australian Plates. New Zealand is part of Zealandia, a micro continent nearly half the size of Australia that gradually submerged after breaking away from the Gondwanan supercontinent. About 25 million years ago, a shift in plate tectonic movements began to contort and crumple the region. This is now most evident in the Southern Alps, formed by compression of the crust beside the Alpine Fault. Elsewhere the plate boundary involves the subduction of one plate under the other, producing the Puysegur Trench to the south, the Hikurangi Trench east of the North Island, and the Kermadec and Tonga Trenches further north. New Zealand is part of a region known as Australasia, together with Australia. It also forms the southwestern extremity of the geographic and ethnographic region called Polynesia. The term Oceania is often used to denote the wider region encompassing the Australian continent, New Zealand and various islands in the Pacific Ocean that are not included in the seven-continent model.